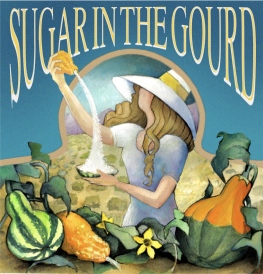 This Appalachian waltz lent itself to mass amounts of devastating mountain estrogen.

A Word on the Band: Back in November, Sugar in the Gourd, an all-girl string band in LA, asked if I could sub short notice for one of their members, which I did with relish since I so infrequently get to play music with other women. The success of that evening led them to hire me for another date one of their members couldn’t make, and before the evening was over I was inspired to recruit them (don’t you love how recruiting begets recruiting? In LA it seems no one has time to “scope out” a musician—you take a chance on them based on word of mouth reports, and if it works out, take another chance on them to test consistency—everything is relationships! And vetters are always simultaneously being vetted by the vettees!). Much love to the Sugars for being So supportive, wild, and interested! “…you can’t get it out…!”

A Word on the Engineer/Studio: Whenever I’m looking for a studio the first step is to ask the band. “Kevin Jarvis at the Sonic Boom Room in Venice,” was Lisa Salloux’ immediate response. In addition to the Sugar in the Gourd record, Kevin Jarvis also does a lot of post production for some heavy-hitting TV shows, a fact which endeared me to him immediately since that’s the business I grew up around in LA through my father. The Sonic Boom Room is a great place to record – complete with a full drum kit, at least three rooms that can be isolated, and shelves and shelves of various snares (“I’ve gotten rid of a bunch,” Kevin promises). The bathroom was clean and the coffee, tea, and company were delicious. SonicBoomRoom.com will be live starting 2017 March 1. Visit Kevin there and peruse his impressive resume…

Lynn Shipley — standup bass
Lisa Salloux — mandolin and BGVs
Aubrey Richmond — fiddle and BGVs
We all co-produced on this one to some extent.

Become a Patron of The Singles Project