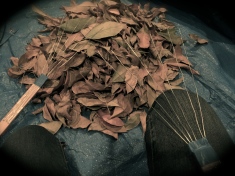 The Free One!
SoundCloud.com

So my uncle is a Texas Ranger and he wrote a pretty rad book that only bears mentioning because it inspired the November single.

Recorded with Ed Tree at The Tree House in San Gabriel. Ed’s playing the baritone guitar, I’m playing the regular ol’ guitar and a pile of dead leaves (not at the same time).

A word on the Studio:

Cozy in what seems like it might have been a garage before years of gear, instruments, artwork, jokes, cables, sound insulation, and a veritable mountain of amps situated themselves in a manner so agreeable that you feel you can stretch your legs without knocking anything over, the Tree House lives up to its name. Not because it’s in a tree, but because it boasts lofty ideals while having its roots firmly planted in the ground. Ed’s state of the art equipment has immortalized countless artists much finer than myself, and I feel honored to have set foot there.

A Word on the Engineer/Player:

The first time I saw Ed Tree play was at a minute songwriter festival in the dusty hills of Santa Clarita, and it was also the first time I saw the Tall Men Group perform. In talking with Ed after the show, and discovering he was an engineer, hungry and blind I got his information, little knowing what an artist he was behind the board. When I tried to do some foley in his studio (dropping leaves down a plastic sheet) and wondered why it didn’t sound like anything, he noted that another sound was missing: Wind. Whereupon up he jumped to his library of CDs, procuring one he himself had produced and engineered, and “borrowed” the sound of wind from one of the tracks. (Thank you, David Serby and Carl Byron for your unwitting collaboration…)

1 thought on “One Ranger in the Treehouse”