The Free One:
Soundcloud.com

A Word on the Song:

I wrote this song shortly after the Boston Marathon bombings. I’m not given to response compositions, I was more inspired by the fact that nearby was a friend from my past who knew me in a way and with a history few others in Boston had. I knew no matter what disasters were transpiring in the world or in my head, I could come to her apartment and be met by a familiar face and a really excellent pot of tea, and no matter how many months had gone by since our last visit we could sit down with no expectations and just be. And the song came to just be.

A Word on the Engineer:

I had the pleasure of sharing a stage with Bernie Nau before I even knew he had an exceptional studio and reputation – Steven invited me to sing a couple of songs with his jazz combo in Athens, OH (and what a hoot! Nothing like jazz in one of the diviest bars in a college/hippie town – stickiest tables I ever did come across – boy I had fun). Bernie was on keys for the evening, and later I learned he was the one with whom we’d be recording the following morning. He was efficient and amicable and accepted me, my budget, my ideas, and my lateness, and even laughed at my jokes. 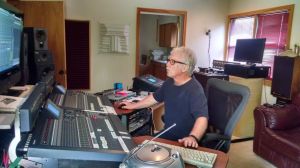 A Word on the Studio:

Peach Fork Studios is set way back in the woods of Southern Ohio, down Peach Fork Rd. A leaning woodshack hangs outside like a smoking farmer. You’re met by a shortish fellow who doesn’t mind that your superglue exploded in your back pocket and you spilled coffee down your shirt while frantically looking for an ATM to pay him what he’s worth. You come inside and immediately after the kitchen is Command where he sits comfortably and starts switching things on. You continue to the next room which is more than adequately sound-insulated, equipped with a Baldwin baby grand and full trap set and enough microphones to embarrass you. Bernie makes sure you’re in tune, your choices are working (though you’ll have to ask), and that you hear playback on several different kinds of speakers to compare. He doesn’t miss a chance to try out new equipment if he thinks it’ll help your project. This place is operational and, as I said, exceptional. Ain’t no basement!

A Word on the Accompanist:

Running into old friends while you’re in transition is a blessing all on its own…but when you also have the opportunity to make music with them, why, words be damned (enter music). Steven Heffner has long been one of my favorite bass players in the whole wide world, with acuity and skill facing down any genre you might set before him. But he lives and breathes jazz.

And thank God for his wife, my friend Melissa (an increasingly accomplished certified Music Therapist) (whom I’ve known nearly as long but who I bonded with later), because in this recording she acted as Professional Listener – a title I coined ages ago as something at which I’d excel but would probably never make a living. Though you can’t hear her on the recording her heartbeat is there as an audience, gifting me with the opportunity to take my eyes off myself. The difference in my personal performance may be subtle, but try comparing this performance to Just Like They Are, the #5 single, when I was all alone in the dining room with my banjo, trying not to mess up. Can you hear it? 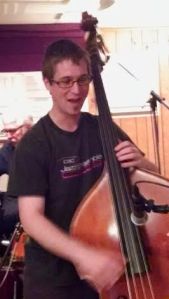 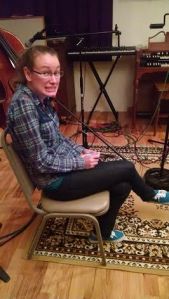