Happy Thanksgiving! I just uploaded the second single, high fives! It’s called We’re Just Folks…And thanks to Hannah Catzen and Matt McArthur down at The Record Company in Dorchester, it has an OBOE on it! …a sad and mournful sound to perfectly accompany a sad and mournful tune…

This most recent recording adventure was an excellent lesson for me: I’ve committed myself to releasing a single each month, and arranging a budget and a schedule to cover just enough time to do just that, and hang the consequences! But what if a consequence of having “just enough” time in the studio is not getting the best performance out of myself? A part of me wanted to release a pre-recorded/previously-unreleased tune for this month of November, then call Hannah and Matt and say, “Do-over!” and release We’re Just Folks in December. Which would have been ABSOLUTELY fine, and they would have been on board with me 100%…but I also have this penchant for perfectionism – which has been known, in the past, to latch onto the heels of my intentions and drrrraaaaaagggg…so this month, instead of “Do-over,” I said “Do it!” and I leave my birthday month with a feeling of having crossed the next thing off my list, which according to some very sound philosophies, is excellent feng shui. I also happen to be quite satisfied with the product. And with myself, I suppose. Did I grow?

A Word on the Accompanist:

Hannah Catzen studied, practiced and performed oboe for fifteen years, then like so many music students, took a BREAK, God bless her. Her willingness to dust off and rekindle her love for her instrument made me very happy that we met and she accompanied me on this. She is currently involved in a swing-y, bluegrass-y project that reappropriates engaging and delightful pop songs for their instrumentation, and is playing standup bass as well as singing in this band. Additionally, she is blessed with greener a thumb than I will ever see on myself. She learned the song in short order and was upfront and supportive of it, me, and the idea. Truer souls are hard to come by.

A Word on the Engineer:

A Berklee grad, Matt McArthur is a special specimen. He is dedicated to a comfortable, community environment, conducive to creating great stuff, no matter how old, young, talented, struggling, enthusiastic, stoic, famous or grassroots you may be. But according to Matt, it’s not just about the sound insulation, or the potentiometers, the mics or even the song – it’s about “the hang.” Between the jokes, the appreciation and respect, the professionalism and the well-stocked tea cabinet, I felt very at home just “hanging out” with this engineer and his philosophies. There isn’t much about his company to which he hasn’t given deep thought…

A Word on the Studio:

When first I spent time at The Record Company, I found myself shutting up a lot while I listened to the mission statement: Mostly that the way technology is today, you can make a really decent recording in your bedroom with your laptop, or even your phone. Which, of course, is pretty awesome. However, this does nothing to cultivate your ability to “hang out” with people while you work on things together, which is a big part of what TRC is about. It was founded in 2009 by Mr McArthur and Susan Rogers, PhD, a powerhouse of a woman in her own right, and they…well, see for yourself:

If you’re lookin’ for someplace to record that has really great equipment, quiet rooms, and RATHER ACCESSIBLE rates…DO check this place out! 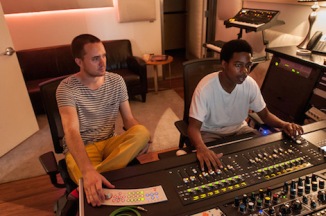